Skip to content
Home/Food/Give it up for the Women! 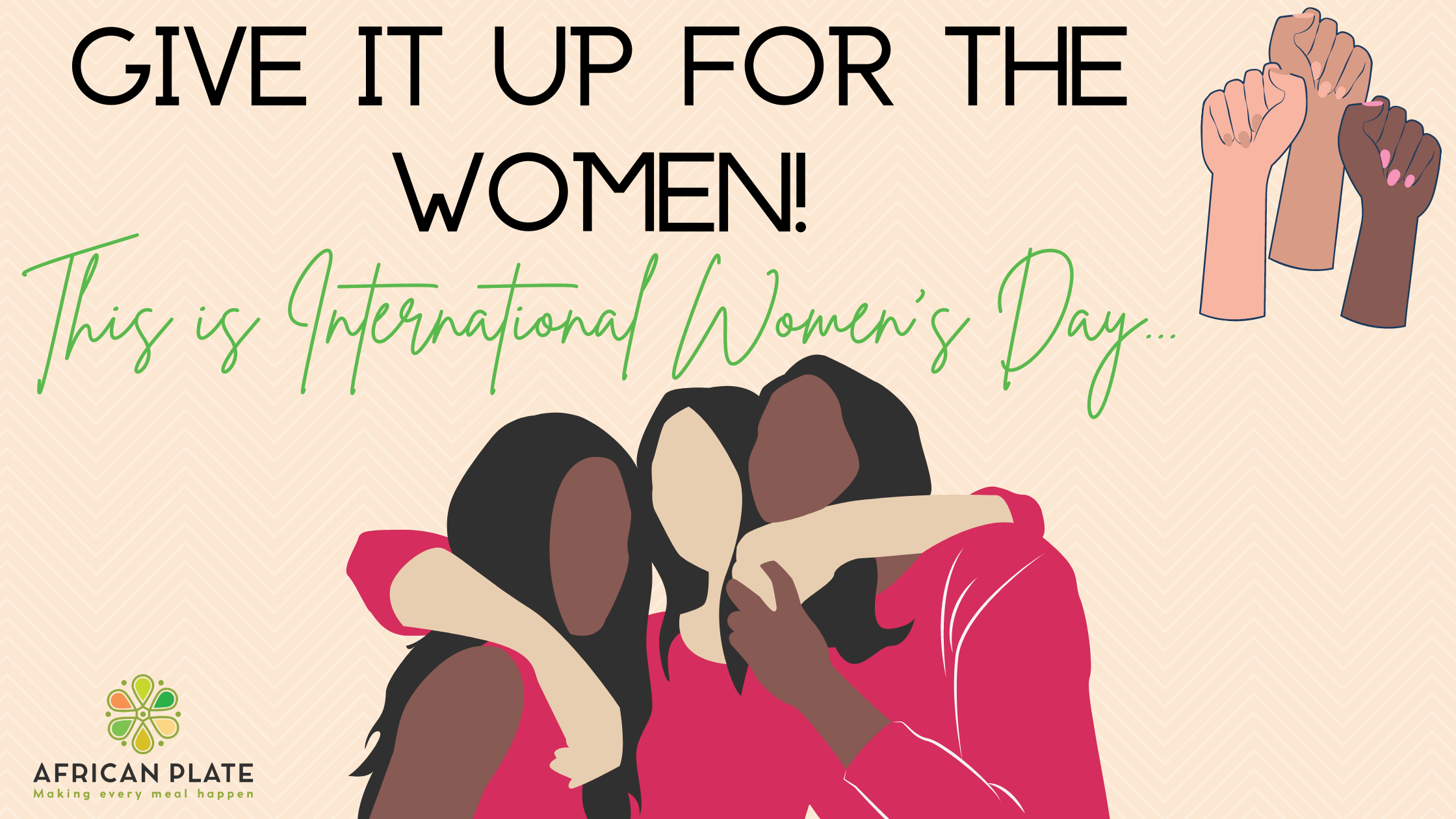 Give it up for the Women!

This is International Women’s Day!!

What is international women’s day?

You may be asking, ‘What is International Women’s Day all about?’ and why we at African Plate support it. Well, this blog is going to answer all your queries.

International Women’s Day is an international global holiday that celebrates and commemorates the cultural, political and socio-economic achievements of women all around the globe. While these are things that should be celebrated all year round, the international holiday is celebrated annually on the 8th of March.

This event was initially spurred on by the original female suffrage movement that began in the early 20th Century. It was only really associated with left wing socialist organisations and government groups until it was adopted by the United Nations in 1977 where it was beginning to be recognised and respected by all.

Why is it important?

So why is International Women’s Day important?

International women’s day is important to uplift women and break many gender biases that are associated with being a woman. Women are often referred to as ‘weak,’ ‘emotional’ and inferior to our male counterparts, and so this global movement actively works to change this outdated view.

International Women’s Day is also a focal point for the women’s rights movements. It draws attention to issues regarding gender inequality, reproductive rights and violence and abuse against women that needs to be tackled.

What things have changed for women?

Many things have changed for women around the world, and women are constantly changing and evolving to challenge the norms of society.

During the early 20th century and even before then, Women having their own jobs and working to receive their own pay check was unheard of. It was expected for women to stay home, raise children and look after the house while they relied heavily on their husbands to work and bring money into the home. It was also rare for women to go into higher education and have interest in certain industries that were not deemed to be feminine, like sports, science and tech. Obviously, in today’s society we can see how a lot has changed as women are now getting an education, working, having an interest in whatever industries they choose and just having that element of independence and freedom that wasn’t there previously.

Women are no longer solely defined on their ability to bear children, cook and look after the home. It is now evident that women are capable of so much more and should be treated as such. Despite this there are still areas that need to be improved and that is why celebrating holidays like ‘International Women’s Day’ are so important to raise awareness for certain issues. There are still gender biases and discrepancies within so many areas like unequal pay gaps and lack of opportunities, so while we have come a long way, there is still so much that needs to be done.

Examples of strong women… near and afar?

International Women’s Day is a time where we celebrate and highlight the many strong individuals that are responsible for pioneering the changes for women within a variety of areas, as well as uplifting groups of women as a whole as it takes many to create real changes in society.

Some key strong women that you may have heard of are Florence Nightingale, Rosa Parks, Maya Angelou or Malala Yousafzai who have all stood up for something they believe in, worked hard and demonstrated the power of women and there are many other individuals who have contributed to the overall improvement of women’s rights.

Sometimes it can be easy to feel detached from the overall movement, but it is important to recognise the strong women surrounding us near and far.

Strong women are closer than you think and so this is a day to celebrate the achievements of the women closest to you as well. This can include family and friends because they are equally important.

There are strong women all around us, who are inspiring to many. Strong women deserve to also have strong food and meals that are packed with nutrients and punches of flavour and that’s where African Plate can be helpful.

All our snacks and spice blends contribute towards a healthy lifestyle, creative mind and strong body. They are all organic, sustainably sourced, freshly packed and consist of absolutely no preservatives or MSG, so you can have a filling and tasty meal that strengthens you as well.

I urge you to try something new and incorporate African Plate into your meals, we promise you will not regret it. And we also want to congratulate and give it up for the women who are strong and are actively changing the world.